The shop has been located at 3427 E. McDowell Road for over 40 years, and has seen every manner of classic car enthusiasts walk through the doors - from first time tinkerers, to some of the most respected legends of the rodding world. 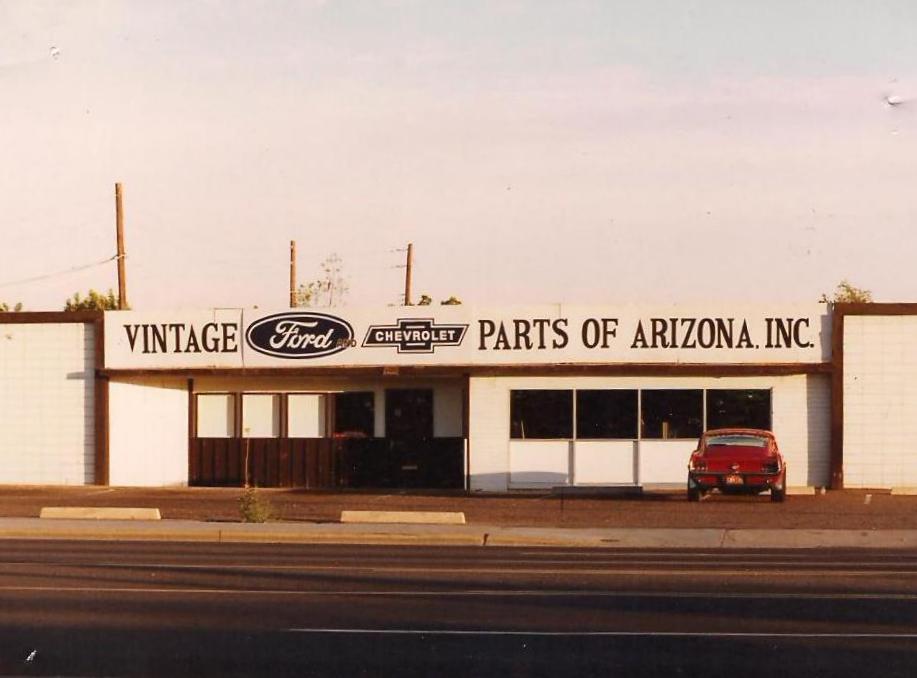 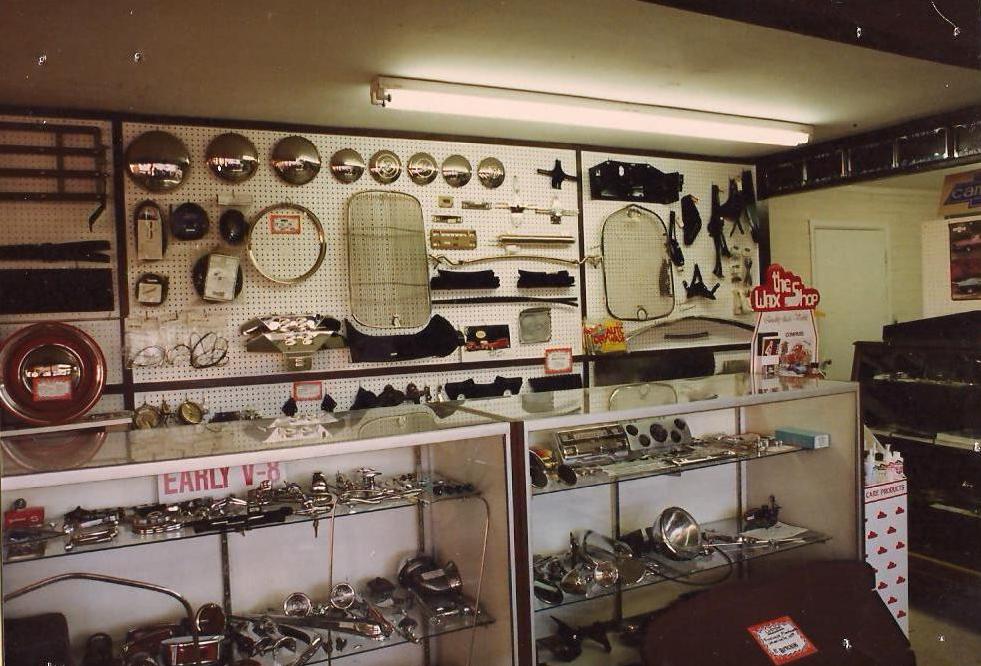 Owner, Frank Streff, started building his classic car legacy early in his youth and never looked back. At 14 he mowed yards and did odd jobs to earn enough cash to purchase his first “classic,” a 1929 Model A square cab pickup. He started his career path hanging out after school at Antique Auto, the late Jerry Mundy’s store and restoration shop, on East Indian School Road in Phoenix. Jerry would say, “The kid just wouldn’t go away, so I finally gave him a job.” When Antique Auto closed its doors in 1974, the void for a local classic parts store was soon filled with the formation of Vintage Ford Parts of Arizona. Partners Wally Lassila and Frank Pittenger had a love for cars, but also day jobs; knowing dedication and talent when they saw it, they swiftly hired Streff. 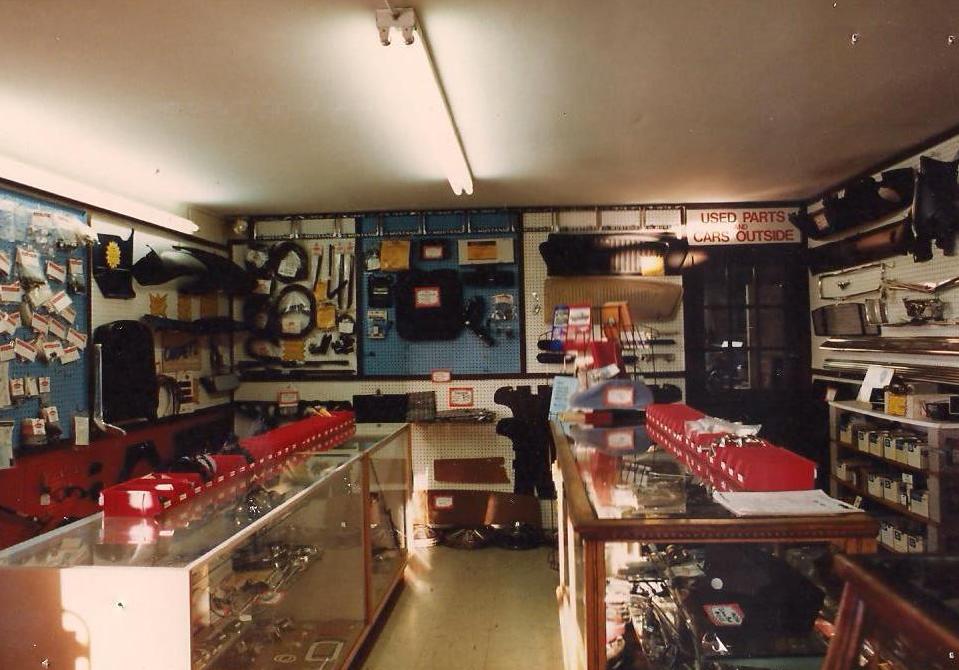 Frank first worked the parts counter, broadening his scope of knowledge within the classic car industry, and soon became the parts expert and a partner in the business. After years of hard work and differing company visions, Streff became the sole owner of Vintage Ford Parts of AZ in 1990. With free reign to develop the business in his own style, it wasn’t long before the revamped business really began to grow. 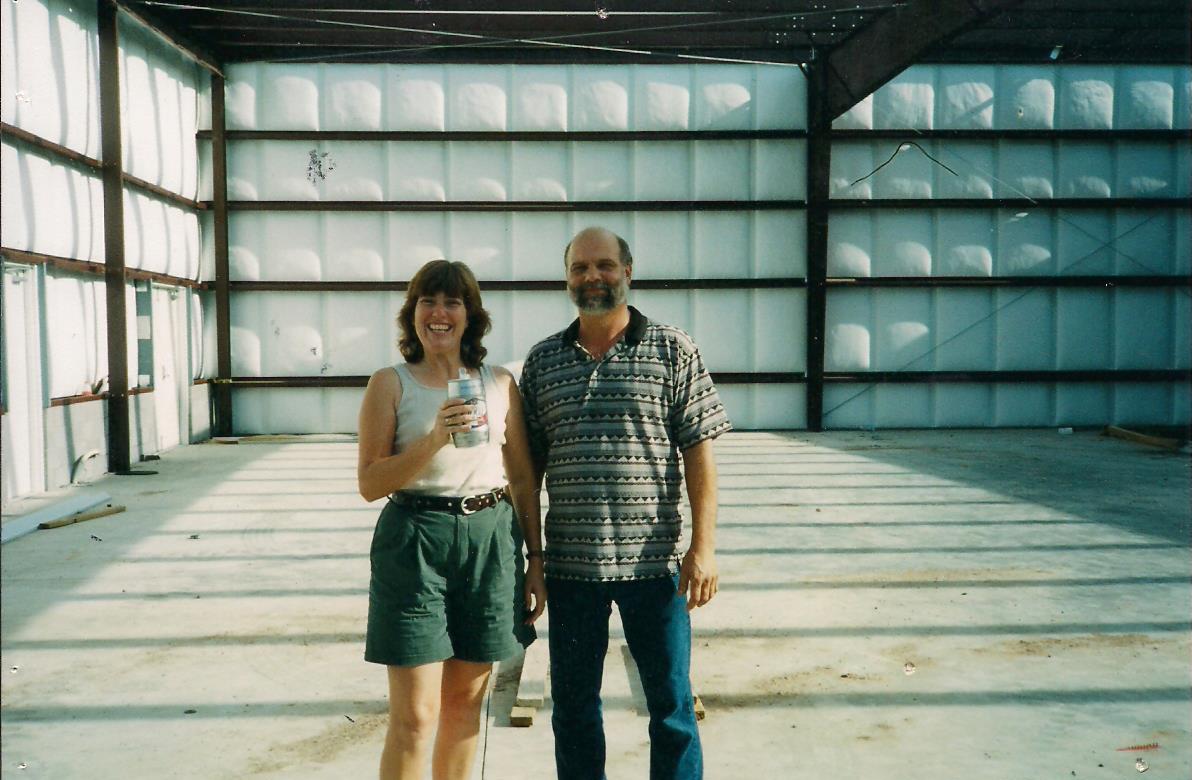 Mary & Frank Streff inside the Structure of the New Buidling

Franks wife, Mary, came on board to help with the store’s growing pains and run the office. Having been raised by a father who was a mechanic and active in the old car hobby as well, Mary fit right in, “To keep up with the rising industry enthusiasm we added more inventories, and new product lines, expanding into Chevy car and truck parts and a full Hot Rod line.” Promoting and vending at car shows became a family affair with the Streff kids in tow. Bonnie and Nick grew up in the classic car culture, helping out in the sales booths and at the store.

Brian Benzing and Dave Sexton were hired to help at the sales counter and pretty soon Vintage Ford & Chevy Parts of AZ was bursting at the seams of the little house on McDowell. Every nook and cranny possible was used to display inventory and it was finally decided it was time to build a bigger and better store. The new building was already in the planning stages when Frank got the call from Pete Chapouris. 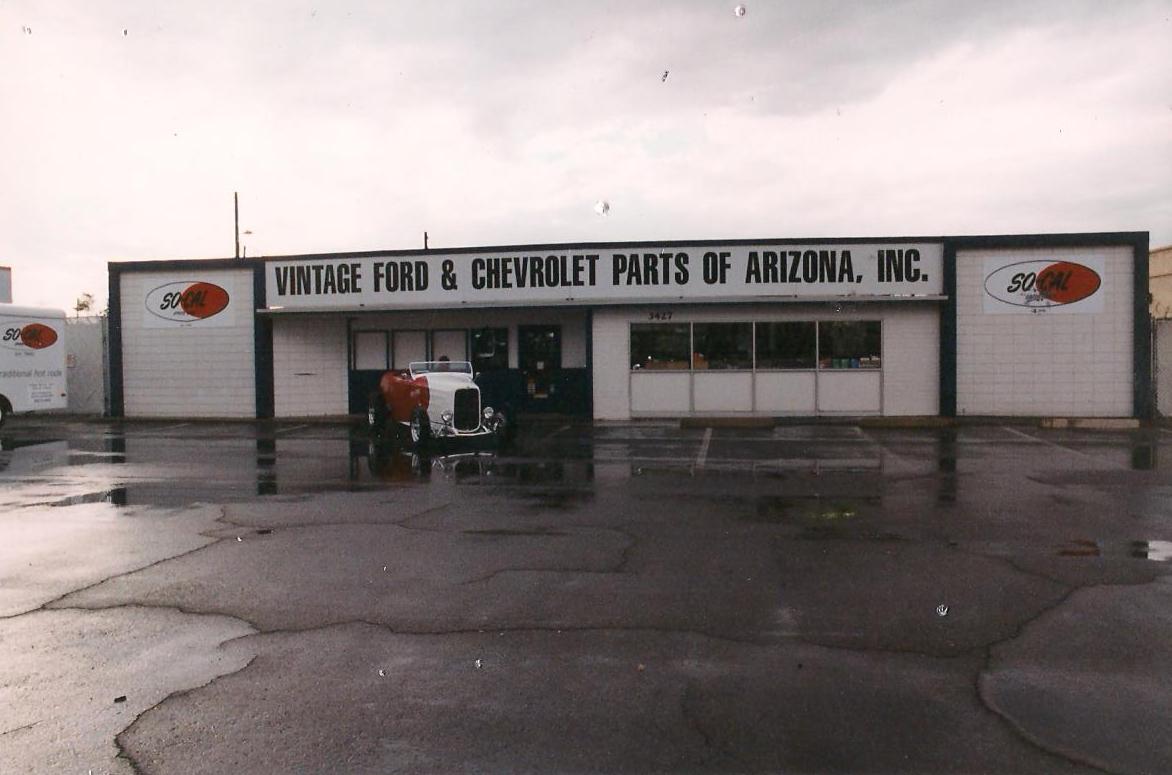 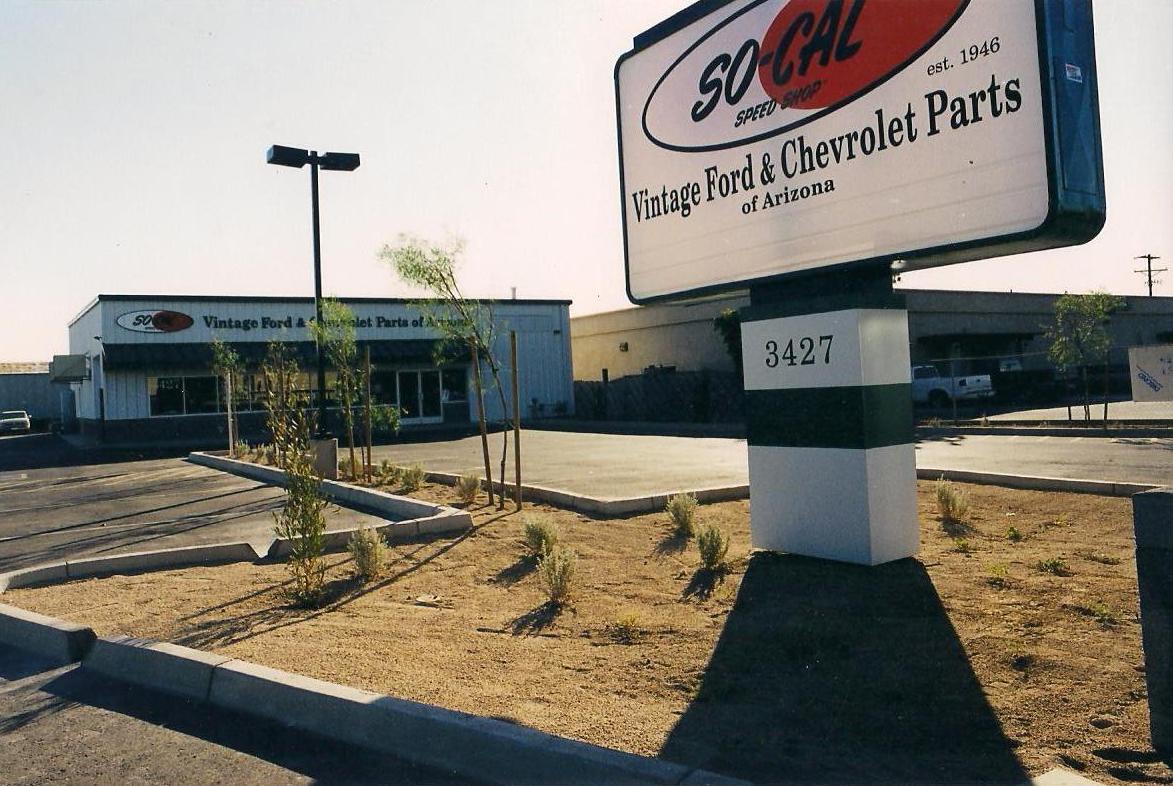 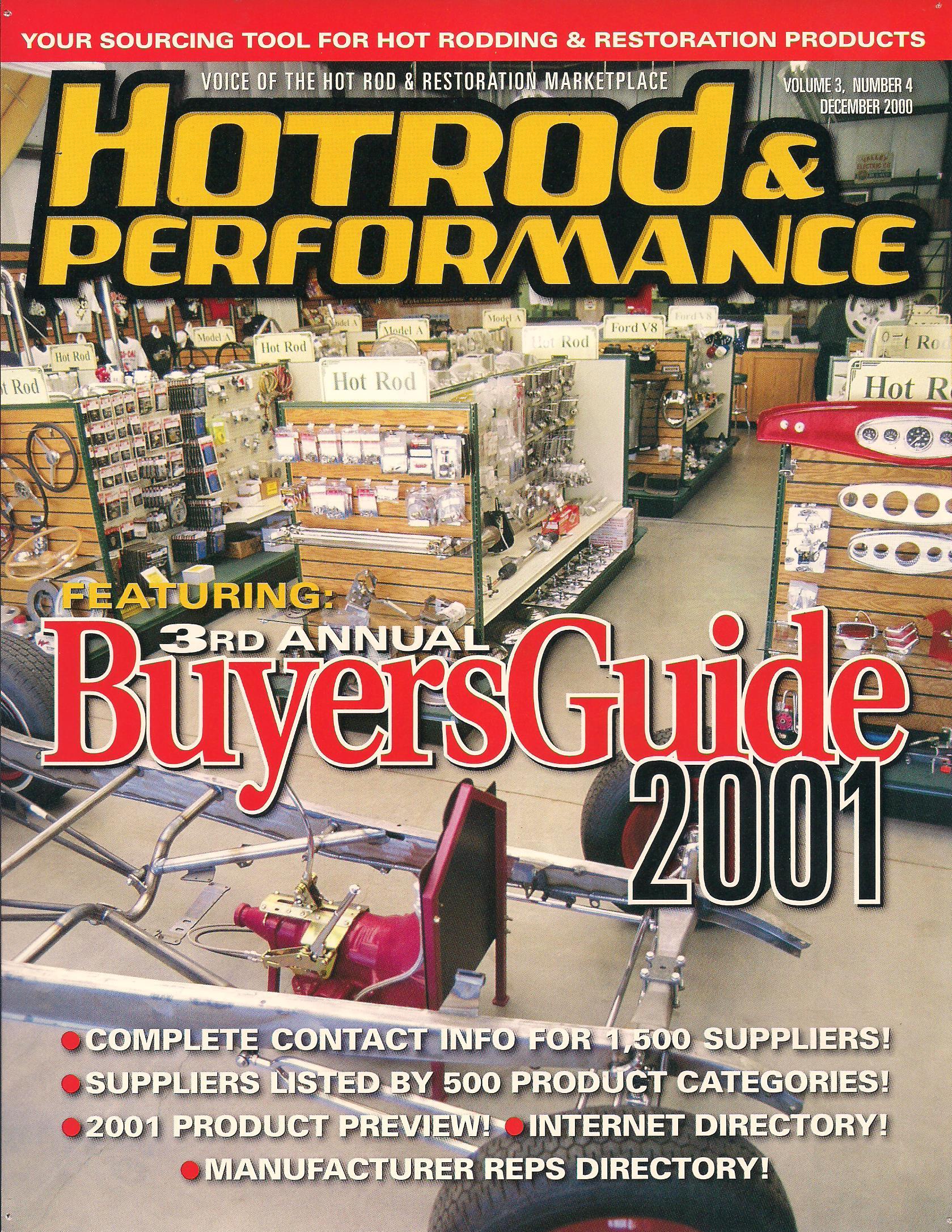 In 1998, Pete Chapouris, Alex Xydias and the newly reestablished SO-CAL Speed Shop were looking for a few good men (and woman) to expand into SO-CAL stores. Frank and Mary were invited to Pomona to talk business. It was a perfect fit; they soon became SO-CAL Speed Shop Arizona. With the new bigger building SO-CAL-AZ and Vintage Ford & Chevy Parts was fondly referred to by Alex and Pete as the “Flagship” of the company. It was even featured on the cover of Hot Rod & Performance 2001 buyers guide as the retail store of the year. 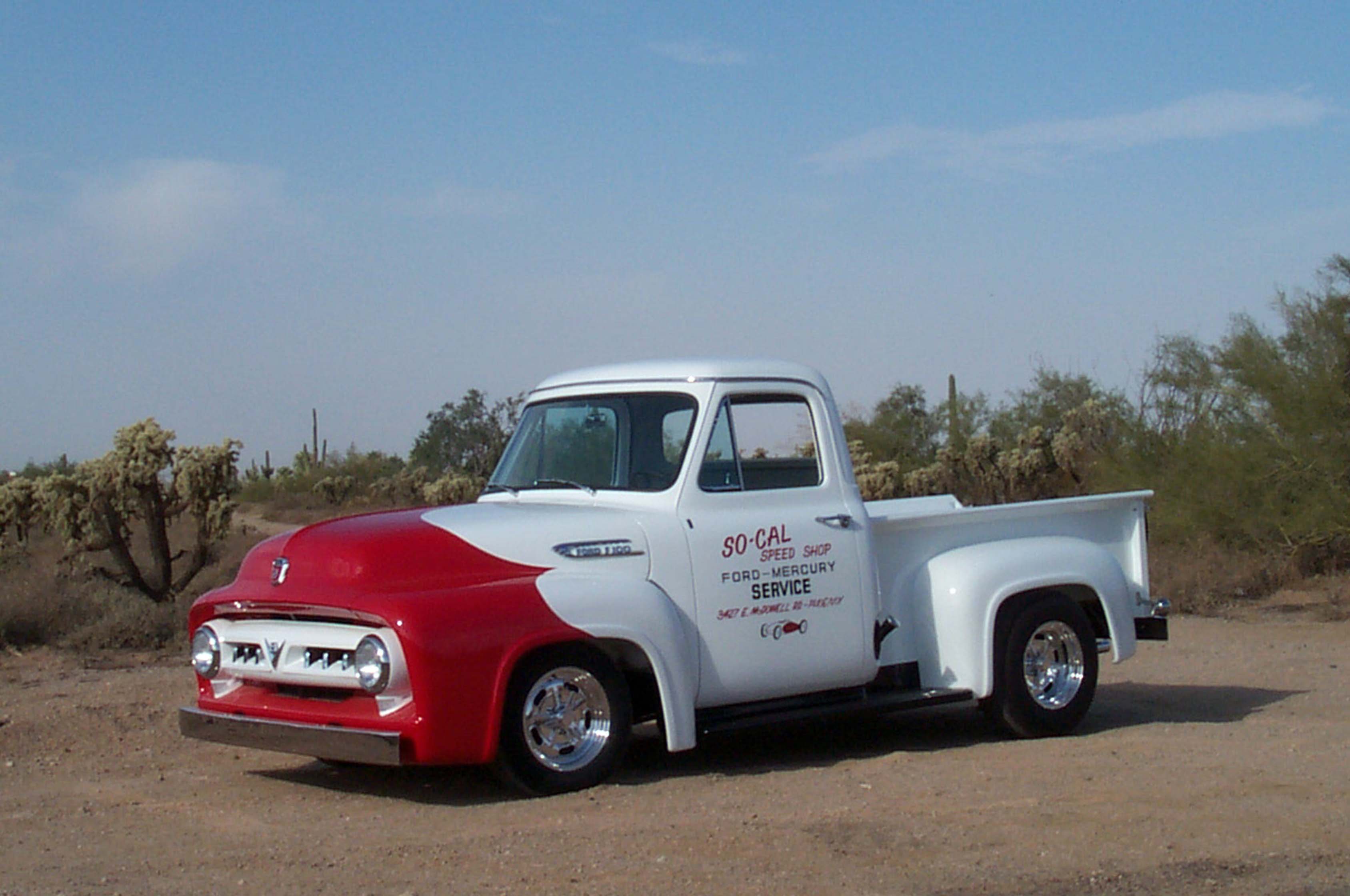 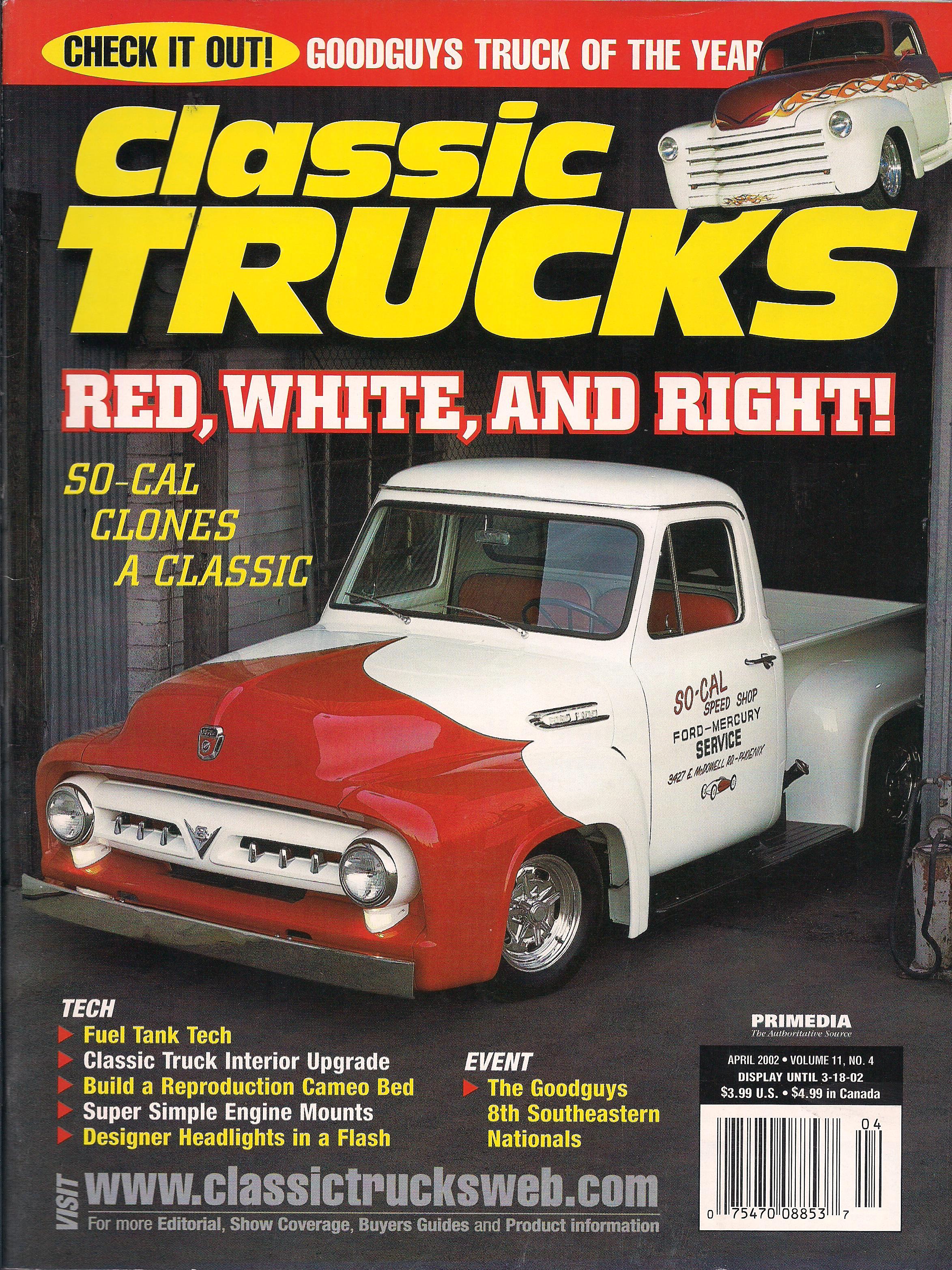 In 2001, Frank decided to recreate the 1953 Ford push truck that Alex had used at the drags and Bonneville. This was a labor of love; Frank and Alex had formed a warmhearted friendship and he wanted to make Alex proud. After a year of hard work the truck turned out great; the build was followed in a four part series with Classic Trucks magazine and featured on the April 2002 cover. In 2010, the SO-CAL push truck was shown at Pebble Beach along with Alex’s historical SO-CAL belly-tanker, now owned by Bruce Meyers. As the first truck ever allowed on the concourse field of this prestigious event, a few eyebrows were raised as the truck pushed the belly-tanker across the winners’ platform, just like they push-started it in the old days at Bonneville. 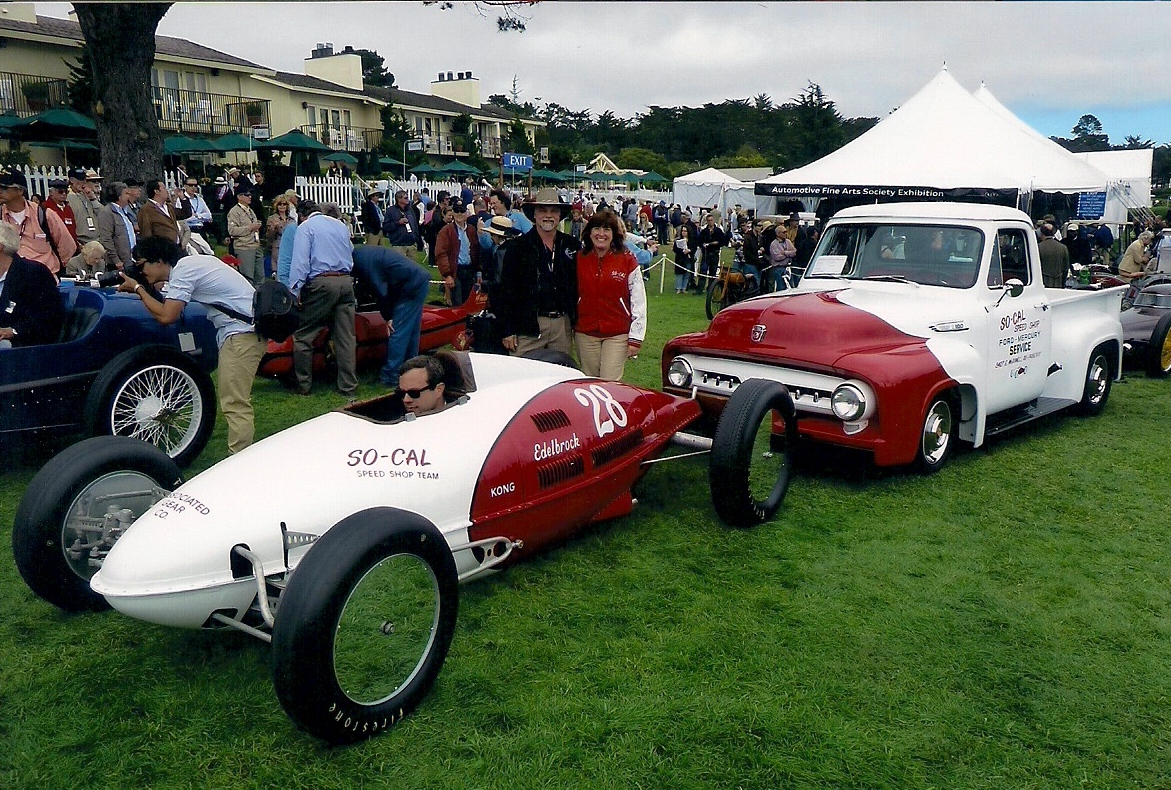 Recently, the store has taken on a life of its own with the monthly Second Saturday event becoming a 10 year plus tradition. Every second Saturday of the month at 6 a.m. the store opens up its parking lot for a car show, shoe-box swap meet, and free coffee and donuts. Meeting old friends and making new ones, with a lot of tire kicking and garage stories shared! Rain or shine, hot or cold it has been a huge success and loved by all that attend. 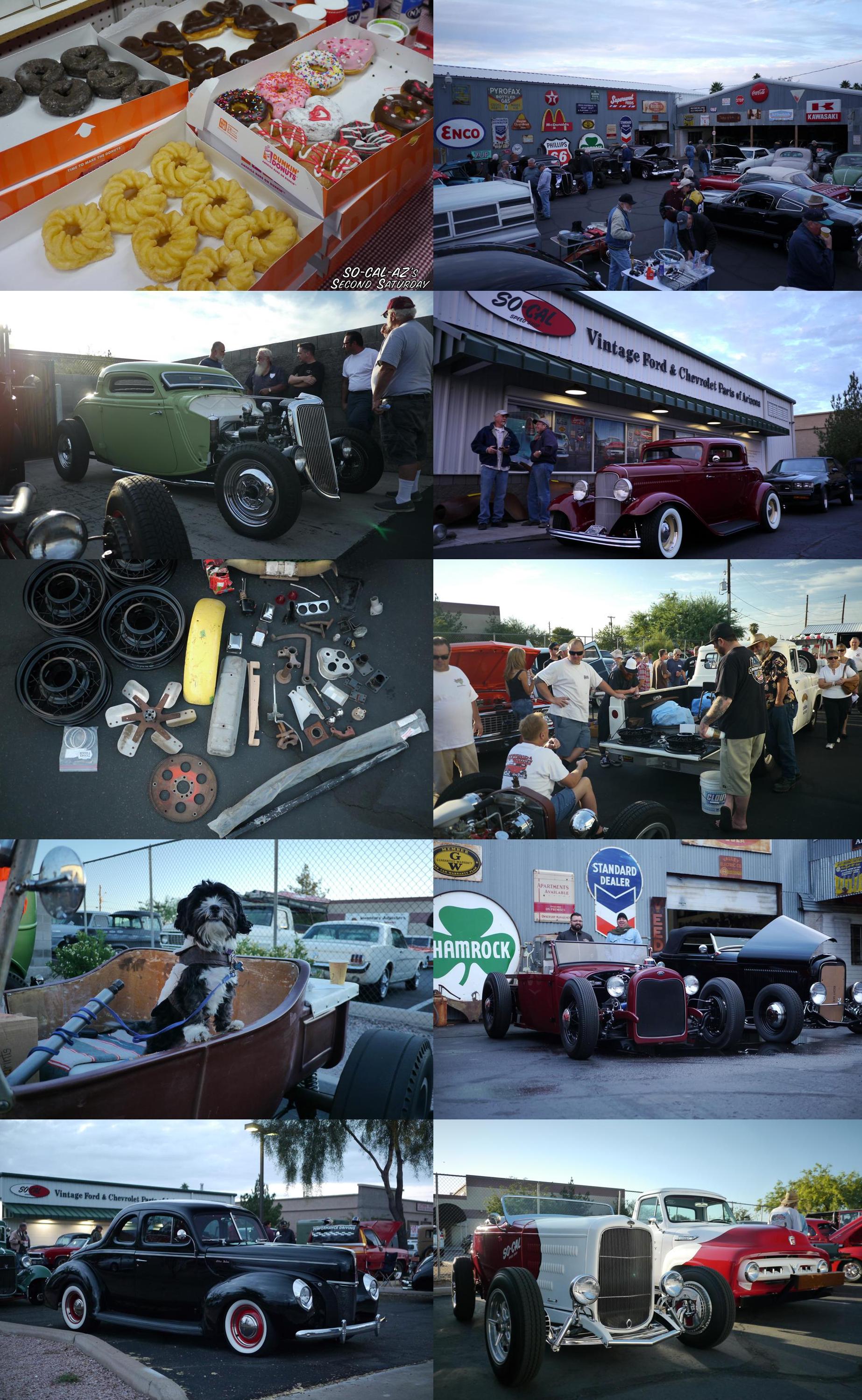 SO-CAL-AZ also promotes educational seminars and How-To workshops a few times a year with companies such as Vintage Air, Classic Instruments, Ride Tech, and Dakota Digital bringing their knowledge and expertise to enthusiasts. The team at SO-CAL-AZ believes it is important to add value to product sales with complimentary events such as these, and takes pride in having a knowledgeable staff with great customer service. SO-CAL-AZ’s motto has become, “Get the right part the first time.” 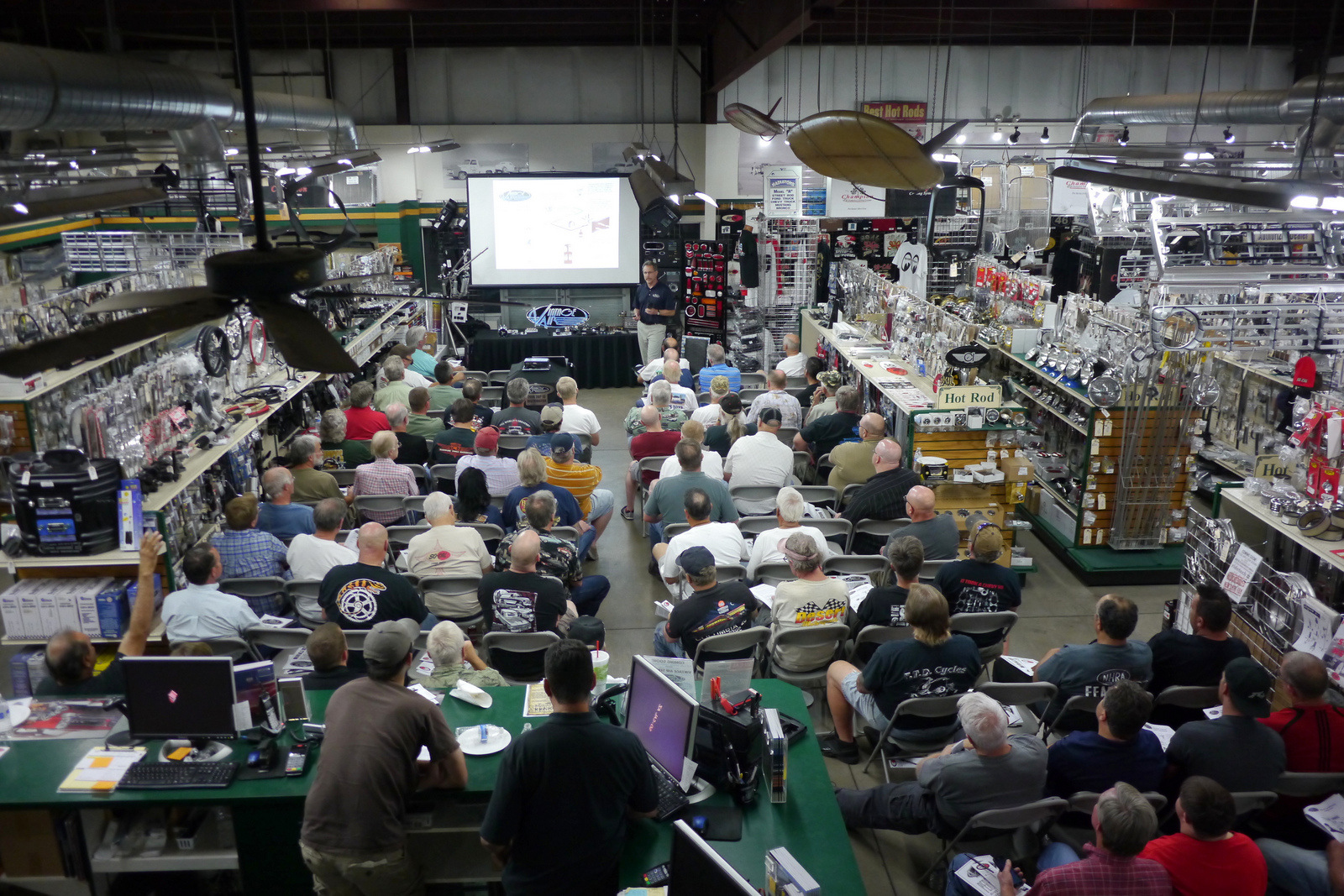 Frank and Mary are proud to have such a wonderful team to work with. Special thanks go to Brian and Dave, whose 25 years of dedication, product understanding, and customer service has been invaluable to the business’ success. Without them SO-CAL-AZ could never have come so far! 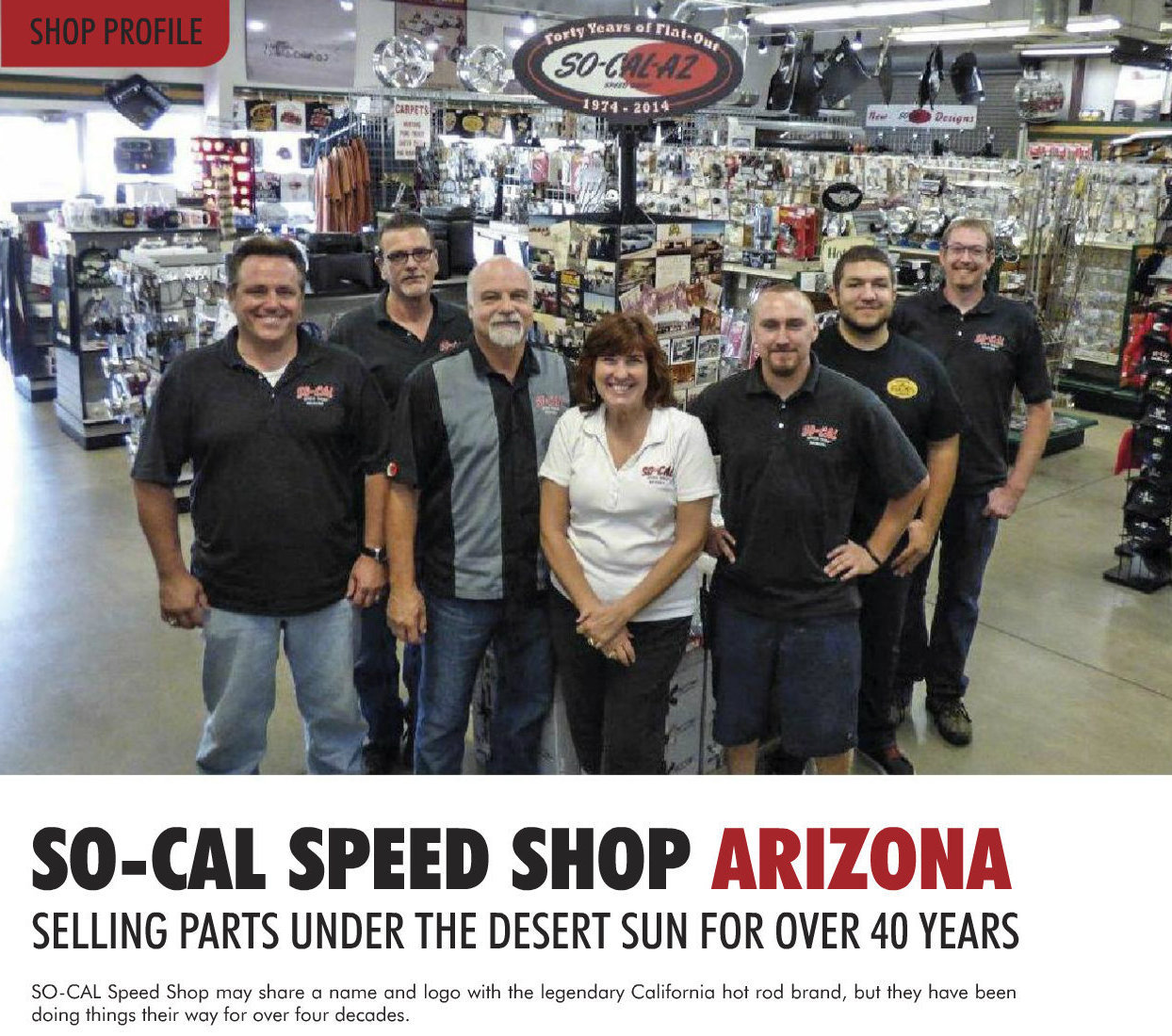 It’s been over 40 years of history, quality and experience and SO-CAL-AZ is still going strong, thanks to all the staff, customers, friends, and family that have made it possible. The community in this hobby, business, and way of life has been the best part of the past four decades, and the team at SO-CAL-AZ can’t thank everyone enough. 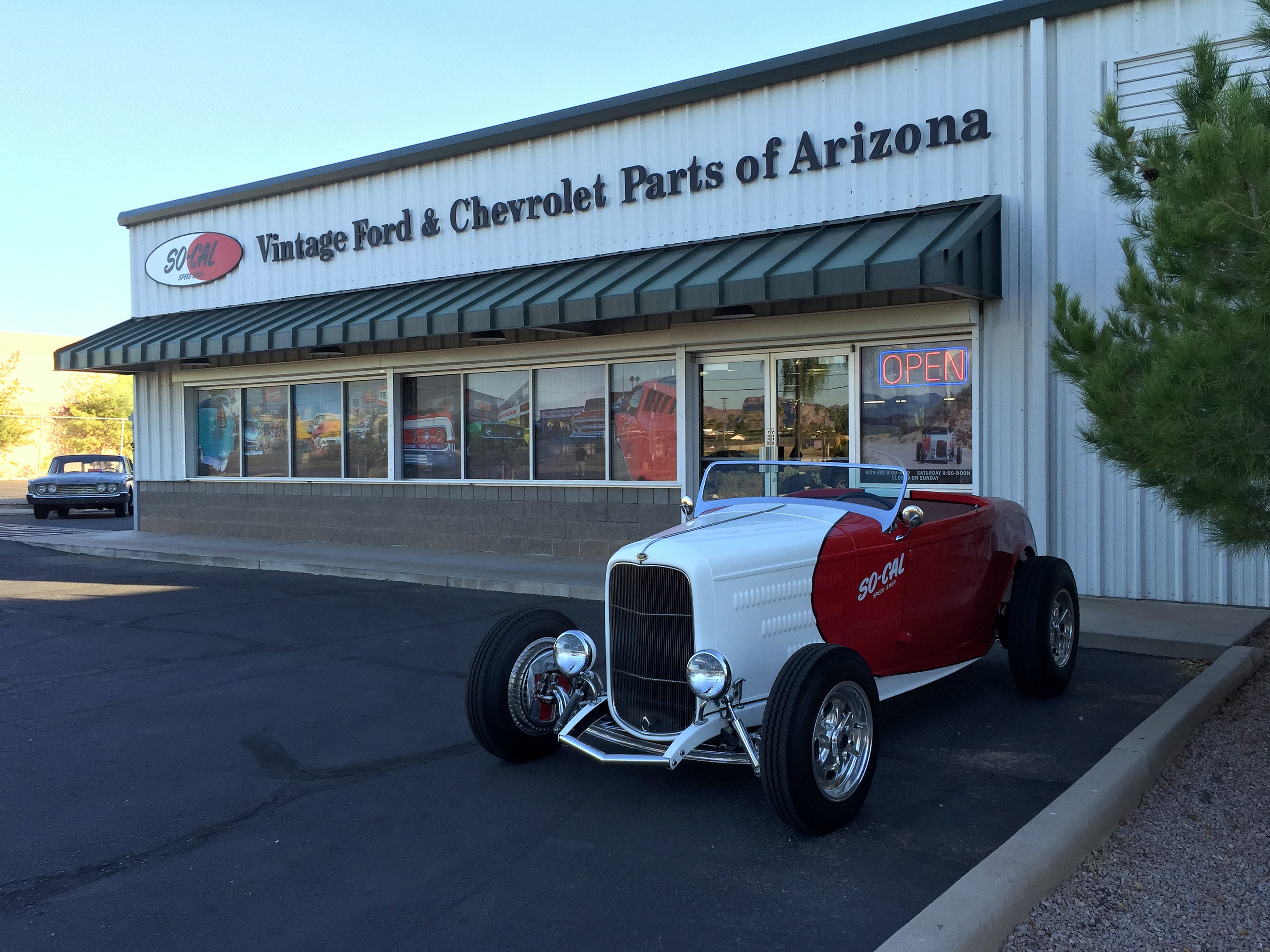